More Than Just OFDMA and MU-MIMO

In 2019, WiFi had celebrated its 29th anniversary with the 11ax wireless standard that manifests the 6th generation of the IEEE 802.11 standard family. During the past 29 years, we had witnessed a skyrocketed evolution of WiFi speeds from 2 Mbit/s in 1997 to the Gbit/s rates with IEEE 802.11ac Wave 2 in 2015; and it’s now challenging the 10G-class rates with IEEE 802.11ax, or WiFi 6, coming this year. According to the current researches on IEEE 802.11 standards, it’s less likely that the WiFi throughput will keep increasing steadily without expanding bandwidths or developing a larger number of spatial steams.

WiFi usages had been drastically changed within the last three decades; a small number of isolated users were replaced by a huge user population, with several devices each person, concentrated in specific geographical areas. In the past years, the term "dense environment" became commonplace as we discuss Internet deployments in locations such as exhibition halls, restaurants, offices, shopping malls, stadiums, hotels, airports, mass events and more. However, "dense environments" also brought forward the issue of numerous APs operating on fully or partially overlapped channels and interfering each other as a result. This issue changes how we see throughput as a performance metric while dense environments created the term "throughput density" as presented by the following ratio:

What makes 11ax so special for service providers?

11ax provides nominal data rates only 37% higher than 11ac, the previous standard, which looks much less than the 10x improvement of 11ac over the previous 11n. Another big difference from the 11ac is that 11ax doesn’t widen the channel or increase the MIMO number as the 11ac did, since the improvement of 11ax comes from the higher efficiency of spectrum usage with applying several new and well-known technologies together in one standard. Despite that OFDMA and UL & DL MU-MIMO got the main focus, there are several features which were also designed to improve the WiFi quality.

Among three 11ax features discussed in this article, the enlarged Guard Interval (GI) is the most underestimated. In fact, it’s the GI is what makes 11ax more effective in outdoor applications.

The previous 11ac WiFi standard defines two GI options: 0.0.4 μs and 0.8 μs, and 11ax adds two new, longer GIs: 1.6 μs and 3.2 μs. So what is the benefit? When a WiFi symbol is transmitted, more copies will reach the receiver at the different times due to the multipath effect; the difference between the first copy and the last is called Delay Spread (DS).

GI, larger than DS, is a protected time inserted between two consecutive WiFi symbols to mitigate the Inter-Symbol Interference (ISI). 0.4 μs /0.8 μs GIs can compete the difference of propagation paths of up to ~120 m/~240 m. They work fine in most residential or office environments, however 0.4 μs/0.8 μs GIs may not work well in larger service areas like outdoor environments.

The concept of "BSS Color" was originally from IEEE 802.11ah, a sub-GHz band WiFi standard for IoT applications. The WiFi 6 defines 6 bits to identify the BSS with different colors, which means that there are a maximum of 63 BSS colors to identify.

With the identifier, the BSSs can operate on the same channel with different "colors" or "no color" to behave as "competitors". They follow the most stringent rule, CS-CCA = -82 dBm@20 MHz, to compete for the air time.

On the other hand, BSSs operating on the same channel with the same "BSS Color" become "allies" and follow the loosened rule, CS-CCA = -62 dBm@20 MHz, to compete with each other.

The well-organized BSS operating channels with the effective geometry of installations and assignments of colors can significantly improve the deployment density of WiFi BSSs as well as network performance in the area. 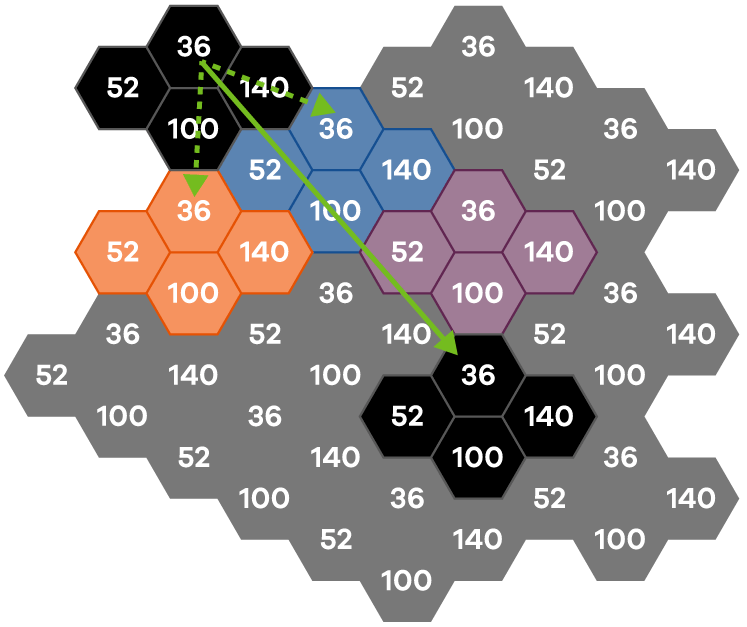 "CS-CCA" is the standard-defined restriction for high-density deployment of BSSs. In addition to CS-CCA, the WiFi device’s transmission power is one of other factors. OBSS-PD utilizing TPC (Transmission Power Control) and DSC (Dynamic Sensitivity Control, CS-CCA in the range of -62 ~ -82 dBm@20 MHz) can further optimize the network performance in an area with high-density deployment.

Before the WiFi 6, WiFi STAs utilized "PS-Pool" or "U-APSD" as the power-saving mechanism, with which the "active" or "sleep" state is independently controlled by STAs. The advent of WiFi 6 introduces Target Wake Time (TWT) concept from IEEE 802.11ah as a centrally managed power-saving mechanism.

Before the 11ax, WiFi STAs utilized "PS-Pool" or "U-APSD" as the power-saving mechanism, with which the "Active" or "Sleep" state is independently controlled by STAs. The advent of 11ax introduces Target Wake Time (TWT) concept from IEEE 802.11.ah as a centrally managed power-saving mechanism.

With TWT, an 11ax WiFi AP can centrally schedule STAs into the "active" or "sleep" state and control the number of "active" STAs at the same time. It brings two major enhancements to the WiFi BSS:

Currently service providers are dealing with a challenge not found in any of the previous standards – the change of traffic patterns. In the rise of user-generated contents online, service providers are required to support high-speed simultaneous uplink transmissions from multiple user devices; and as more users and industries are turning online, operators face more pressure offering solutions for the increasing needs and types of applications. The question has become how to keep their business survive in the trend while reaching new audiences and industries under such a stressful condition.

The major benefits of 11ax are not just higher data rates, but also advantages such as QTP, TWT and the concurrent dual-band operation that work well in high-density environments. Some of the 11ax patterns are not totally brand new, however they have never been implemented as a whole in an IEEE 802.11 standard. Perfectly set on the verge of experience and innovation, the 11ax standard is probably the same epic as the Avengers Endgame movie where you can see all your favorite heroes fighting together as a dream team.